Why I cried in the post office before Veteran's day. ~ The Grace Between

Why I cried in the post office before Veteran’s day. 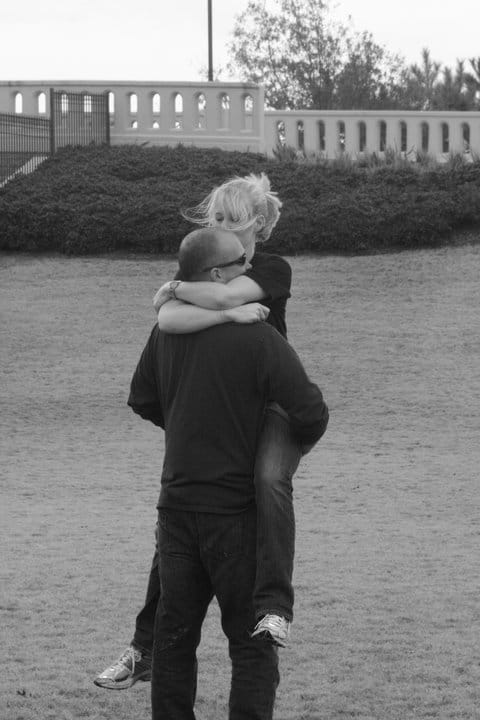 He came home all four times/this was taken just after we reunited for the second time.

I stood in the post office the other day, boxing up the bulk of my children’s Halloween candy to send to a friend overseas. I fumbled over the customs form, a piece of paper I’ve scribbled hastily on what feels like a thousand times.

I couldn’t remember what to do to fill it out. And I was flooded with an odd sort of deja vu, a knowing and a not knowing. This was my life, every few weeks, with a posse of wild children weaving in and out of my legs, juggling boxes of cake in a jar, bbq sauce and random Texas-related things up to the counter. Haphazard bits of home covered with excessive amount of tapes. So afraid that this would be the last one, or the one he didn’t get. So afraid that home would escape him when he returned, the haphazard and the whole bits all together.

Now I can barely dredge up those memories, mostly by choice, until I stand, frozen, in the post office, and I realize the scars remain, scraped open at times when I least expect it. It’s familiar and terrifying all at once. And I’m angry that I don’t know what lines to fill in, because it feels important that I remember, and I feel betrayed by the forgetting.

When we graduated flight school in February of 2005, we all left knowing our paths would converge again half the world away. The war in Iraq was fresh, and looming on the horizon for many. No matter. We were young, we loved our country, and we were invincible.

Fast forward twelve years, and my patriotism looks wildly different now. It’s complicated. My friends are wounded. Some are dead. We are all a little broken, all frozen among the ordinary moments in post offices and churches and grocery stores that suddenly prove extraordinary, flush with memory and grief.

I still have so much love (and ache) for this country, but I’ve written before how weary I am of war, and all that comes with it. Suffice to say, it’s complicated.

But you know what isn’t complicated?

The persistent, steadfast love I have for my people, my veterans, my (dysfunctional) family. We are connected without rhyme or reason, forged by blood and battle, by grief, gain, and loss. A silent collective of shared service, sacrifice, and scars, carved into the landscape after decades of war.

And love them so very much I do, enough to stand in the post office and revisit memories better left in the dark.

For Andy, and Jaime and Sarah. (And for Paul). There are so many more, living and mostly living, and long gone. On this Veteran’s day, and every other, you have my heart. And my memories. And my gratitude.