July in Tennessee ~ Red, White, Blue, and Gold Stars. ~ The Grace Between

It’s July now in TN, a never ending tide of 100 degree days that wash over us in a haze of sparklers, sweat, and the red, white, and blue. 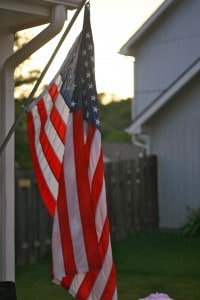 In this town, though, it’s cut with shots of gold. Gold stars to be exact. They come up on you quickly, a subdued gut punch on a license plate, tacked on to the minivan in front of yours. Sometimes I do a double take- it’s so ordinary,  the small gold star on a dirt splattered rectangle caught at the same red light with me. It’s not designed to carry the burden it bears, these glittering five points that will drive to the grocery store and the library and then maybe to the car pickup line at the middle school.

It tells a hard story that we are losing the stomach to hear, and it’s unassuming and awful all in the same glance. A hammer blow to the walled off parts of my own soul where the fear still lingers.

Before Memorial Day, I was driving on to the base for an emergency room visit with my third babe and I slid up next to one in the turn lane. Fat, surprising tears welled up when I spotted the tag ~ I’m no Gold Star widow, but death, and loss have imprinted us all in ten years of war. {Go here to read my friend Kryste’s story}. While time has provided a measure of cushioning against the sharp stab of grief, occasionally one slips through. Every time I say my firstborn’s name, I’m reminded of the cost. My Jaime tells the story of our Jaime.

This life we live? It’s not free.

So here, in the hazy heat bound by noisy fireworks and patriotic fervor, how do we honor the sacrifices that produced the birth of our nation? How do we keep from feeling they sacrificed in vain?

I haven’t earned the right to tell you that any of it is worth it.

But this is what I will tell you …  {these words, borrowed from myself two years ago}

Major Sullivan Ballou wrote a now famous final farewell letter to his wife Sarah a week before he died at the Battle of Bull Run. A portion of the letter reads,

“I have no misgivings about, or lack of confidence in the cause in which I am engaged, and my courage does not halt or falter. I know how strongly American Civilization now leans on the triumph of the Government and how great a debt we owe to those who went before us through the blood and sufferings of the Revolution. And I am willing—perfectly willing—to lay down all my joys in this life, to help maintain this Government, and to pay that debt . . . ” (pbs.org).

Yes, there are many days when I feel as though we strive to honor them in vain, but there is no contesting the debt we owe as citizens here.

And, when heaven and earth is laid before me, and I wrestle wearily with the ugliness of men and the fatigue of war, my battered heart takes note of what my Heavenly citizenship entails.

“Therefore submit yourselves to every ordinance of man for the Lord’s sake, whether to the king as supreme, or to governors, as to those who are sent by him for the punishment of evildoers and for the praise of those who do good. For this is the will of God, that by doing good you may put to silence the ignorance of foolish men—as free, yet not using liberty as a cloak for vice, but as bondservants of God” (1 Peter 2:13-16).

Today, and everyday, our men and women represented by emphatic gold stars on license plates, in windows, on hearts, in graves all over … they sing loud in a ghostly choir of their sacrifice made to silence the evil, the ignorant, and the foolish.

And we, the living, echo their songs with our own …  we who set about to serve a Shepherd who loves us well and sends us into the world to care for the least among us, unbound by borders, language barriers, and cultural divides.  And our small lives living the truth of the gospel bind together in harmony, a heavenly chorus rising in concert to silence the ignorance of foolish men.

With this, maybe, just maybe, we pay tribute. Don’t waste the life you are free to live.

{And friends? … While I write this, let me slip in as always the truth that it is not the act of doing good that saves us, rather the gospel transforms us into those that would act…}

P.S. Did you read about my friend Kryste? She is living tribute  … consider doing some good with her at Live Your Loud, honoring her husband Frank Buoniconti